New Year’s Eve is always an interesting holiday for me. There’s the excitement for a brand new year. Then there’s the nostalgia of looking back on everything in the past one. There’s usually a little sadness involved, what with Christmas being over and the anticipation dying down. And don’t forget the electricity in the air when everyone begins to feel like reinventing themselves.

I’m usually a pretty big supporter of ringing in the New Year in overly fabulous ways. But not this year.

My New Years’ plans started out in the vein of throwing a huge cocktail party with a close friend, Danae. But when Christmas travel plans prevented us from planning early and then Danae and her husband both got sick, we decided to nix the endeavor two days before. So now I wasn’t sure what I was going to do. Bill had to work until 11:30 p.m., which meant he would just make it for a midnight kiss on our first married turn-of-the-year. I had been invited downtown, but that makes it especially difficult for him to drive from work, park, and get passed the line, in the bar, through the crowds, and next to me in the 30 precious minutes after he clocked out. We tried that two years ago, and it wasn’t the best experience for either of us.

So I had a few options. I could go downtown with a large group of some of the most fun people I know, but risk missing Bill at midnight. Plus, no matter how hard I tried, I would probably end up hungover on New Years’ Day. (No thanks.) The other option at this point would be to stay home with the dog, in my cozies, watching movies, and drinking champagne. Alone. I found myself excruciatingly torn, and I couldn’t figure out why. I didn’t want to be alone,  but I also didn’t want to fight a sea of drunk people all night long. I didn’t want a dead house, but I could not wrap my head around deafening bass thumping and party screaming either. I felt like my former party girl self was at war with my new wife persona, and I didn’t like it. I don’t want to be lame. I really don’t. So I didn’t say anything, and I wrestled with my decision and spent the last few days of 2013 stressing about it.

But then I realized that one of the things that I wished I could change about 2013 was how anxious I felt, the composed show I put on, and the feelings I hid. I spent a lot of time struggling internally with how others would view me and what they would think, and the shoulds and the coulds and the have-tos took over. It made for some unnecessary unhappiness, and I didn’t want to do that again. 2014 is going to be different.

So I put on my big girls pants, and I owned up to my true feelings in a text to Danae.

“So I’m feeling really weird about tonight… I’m almost feeling like this year was so crazy that I want something more mellow and less crowded with college students than downtown.”

I held my breath. I had officially entered the zone of marriage decreptitude I had been violently denying and fighting tooth and nail since July. I’m only 26. That’s too young to die on the inside, right? But to my surprise, Danae’s response echoed mine.

“Oh I totally feel the same way! I’ve been going non-stop and then this cold kinda killed it for me. Honestly, I’m happy watching a movie and drinking champagne. I know I’m a party pooper, but I really don’t want to go out.”

If she’s a party pooper then I’m a party pooper, because that sounds like exactly what I had been hoping for over the last few days. I just wasn’t brave enough to say it out loud… until now. And guess what? I said it, and I felt SO MUCH BETTER. We explicitly decided to spend this New Years’ Eve in a way that would set the tone for the year to come, and the result was beyond spectacular. A simple night celebrating good friends manifested in Danae and I in sequined dresses and drinking peach champagne… while watching comedies and putting together a good old-fashioned puzzle in the company of her husband, her siblings, and – at the end of the night – Bill.

Not only were the activities of the night a perfect mix of simple and glam, but the company was just as fantastic. Danae was such a wonderful addition to my life last year as our wedding stylist/coordinator with her company Danae Grace Events, but more importantly as a friend once the nuptial craziness died down. As you can see, she has an uncanny ability to make simple things beautiful, without second thought. I am constantly inspired around her.

Simple does not have to mean ordinary! 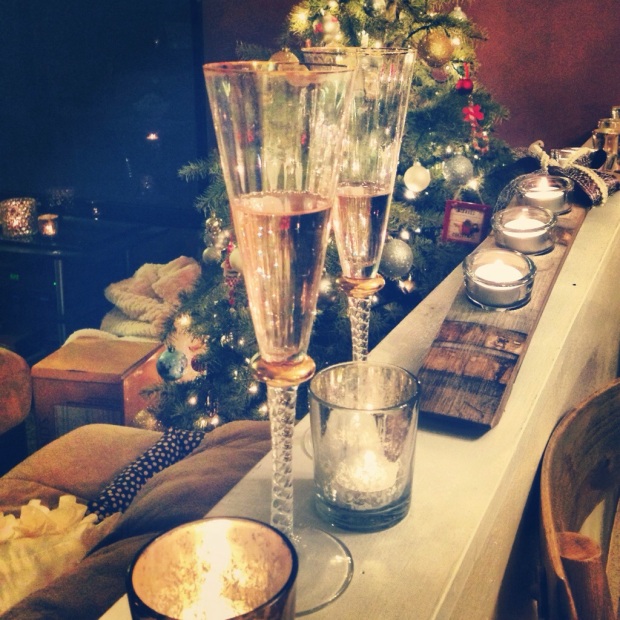 A snapshot of the season. (I often say my favorite food is champagne, but even more so when it’s enjoyed from gold-rimmed flutes in front of a Christmas tree.) 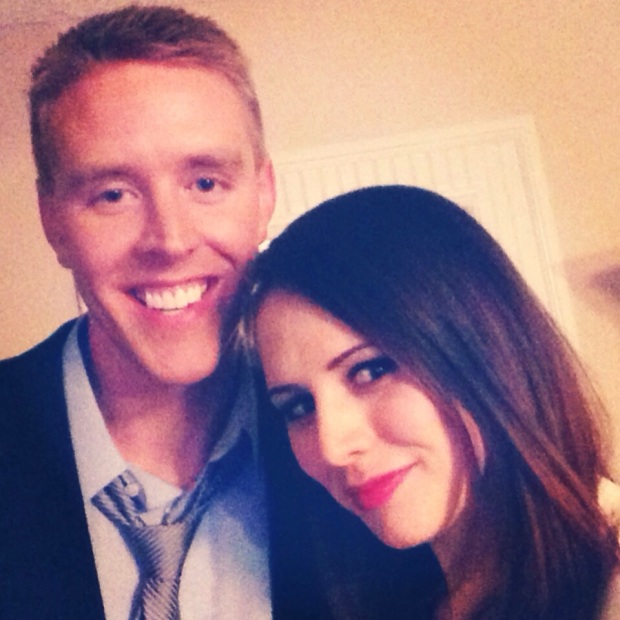 The husband and I just after midnight, looking forward to what’s to come!

So in the end, we wore our sequins, drank our champagne, and shared a glamorous night in. Our night was quiet. It was cozy. It was comforting. Oh, and it was marvelous, of course.

Just like I hope the next year is – in every way, shape, and form.