Sometimes even our most important relationships can fall to the wayside when life gets going, and daily tasks take priority over daily people. Bill and I have admittedly been having a bit of a less-than-ideal patch, what with our schedules and responsibilities and still learning and adjusting to life as a married couple. Our relationship needed a little (or a lot of) TLC, and that’s exactly what we gave it last weekend with a quick, QUICK trip to San Francisco.

In our house, there’s is absolutely no doubt that our loyalties reside with each other… and the Minnesota Timberwolves. Before I met Bill, I had tried and failed to get attached to an NBA team in the way I have devoted my allegiances with the San Francisco 49ers and the San Francisco Giants. Alas, the Kings (closest to home) had never won my heart and the Warriors had made a seriously weak attempt at inserting themselves into my periphery on a consistent basis. This meant that Bill, who has devoted his life to sports in every aspect of life from career to hobby to preferred leisure activity, seized the opportunity to gather me up and place me right smack dab in the middle of Timberwolves fandom (with a small amount of help from the adorable Spanish-transport Ricky Rubio… those eyelashes!).

So being incredibly on top of everything Minnesota and sports-related, Bill took the sweet and passionate initiative to plan a trip to San Francisco to catch the Wolves playing the Golden State Warriors. He bought the tickets, booked the hotel, communicated with two of my great friends who live in the bay, AND planned way ahead to take both a Friday and Saturday off. The latter is actually a huge deal in our house, especially after the 4-Months-Without-A-Day-Off-Together Episode of late 2013. So I blocked out my calendar for January 24th and secretly looked forward to it for about a month. Here’s how it all went down!

Bay Area traffic is no fun, unless you use the opportunity for impromptu wife-imposed dance parties to the tune of Ke$ha’s latest album. I swear to you, I am 100% unashamed at how much I love her train-wrecked songs.

We met up with amazing friends Ashleigh and Joey, who moved to Daly City last August, at Jasper’s Corner Tap and Kitchen near our hotel and the Powell Street MUNI Station for pre-game snacks and libations.

Jasper’s offered an cool and modern atmosphere, deliciously elevated pub fare such as mini sliders and pretzels served with gouda fondue, and a great list of beers on draught. Not normally one to partake in tasting flights due to bad experiences with small portions and high prices, I am officially a convert after taking a risk and discovering my new favorite beer. Run to your nearest fancy beer source (my words… I haven’t looked at BevMo! yet) and try out the AVBC Barney Flats Oatmeal Stout. Worth. Every. Penny.

Ashleigh and Ashleigh… Yes, I do have a great friend with the same name, although our heights and dance abilities to the tune of hip hop, urban street jazz, fem, grooving, and house are significantly in opposition. (She’s the dancer, in case you had any doubt. Check out her new Bay Area-based dance company here: Street Adrenaline Dance Company.)

Next up, Timberwolves domination. Well, sort of. They squeaked by in the last ten seconds or so to pull off a final score of 121-120, finally lifting morale slightly during a horrific run of heart-breaking losses. I was much more vocal (obnoxious, maybe?) than all five of the other Minnesota fans in the entire arena and even Bill, which meant some unwelcomed taunting and cheap digs in my directions from the die-hard Warriors fans of Oakland. I did manage to make it out alive.

Do you know what’s really fun? Seeing someone you love so much in a situation they love so much. I might even say he was in his element. Adorable. 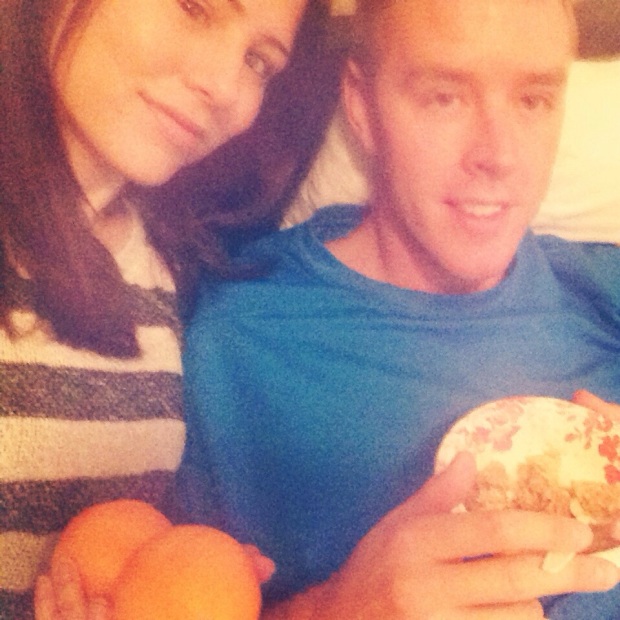 Saturday morning brought an early wake-up call in order to take advantage of the free breakfast found tucked away on the 5th floor of our tiny hotel. We snatched up the essentials from the breakfast closet  – no seating area and no room for all ten of the people who came in after us and decided no-they-could-not-wait-for-us-to-finish-and-leave before scrambling for instant oatmeal, generic pastries, and the worst coffee-water I’ve ever had in my life. We plodded back to our dungeon of a room (see terrible quality picture above with absolutely zero natural light) to realize that it was so small that the only reasonable place to sit was exactly where we had just slept. Breakfast in a full-size bed it was!

Disclaimer: I do not mean to throw our hotel completely under the bus, just… slightly. Yes, the room was small and the coffee was terrible, BUT it was a amazingly located practically on top of Union Square and close to the Powell Street BART Station. Plus is wasn’t as outrageously priced as everything else in the area, so if you aren’t planning to spend too much time in your hotel room, checking out Hotel Fusion could be worth it. (But the website is definitely a misrepresentation… It’s more adequate than, say, awesome in reality.)

So since coffee is such a integral part of treating myself when on vacation, shitty hotel coffee just would not do. Yelp-ing nearby coffee shops lead to the exciting discovery of Blue Bottle Coffee Co., which with 1264 reviews yielding a solid four-star rating, I was not going to let myself miss out on. Since Bill does not enjoy coffee in the least and was feeling more or less, um, under the weather – which may or may not have had anything to do with the shenanigans from the night before – I ventured out on my own in search of not-your-average caffeine fix. However, following my maps app left me stumped. I wandered and wandered Mint Street in search of some visual indication that I was in the right place, but nothing jumped out. Disappointed, I turned back toward the way I came for the third time, and the first thing to catch my eye was the street address. And around the corner from the street address was a small group of people huddled in a doorway. And above the doorway, I saw the only marking indicating that roasted bliss was waiting for me was the small (the picture make it look huge) sign serving as their advertising. Small, unmarked, back-alley coffee shop? That had mean only one thing: local secret hidden gem.

While waiting in line, I hurriedly gathered as much info as possible to make an educated order. What I found? Exotic (and expensive) coffees from around the world and a new technique I had never seen for brewing the perfect cup. I almost ordered an $8 cup of regular coffee just to experience the siphoning myself. However, I went with my favorite in order to compare, and when I asked what flavors they had for their nonfat lattes, the barista replied, “We don’t have flavors for our coffee,” and looked at me with a sly smile as if to say I was in for a treat.

With short pit stops at the seven-story Macy’s and the most beautiful Crate&Barrel on the planet, I made it back to the hotel to find Bill chipper and ready to head out on our next adventure. When the grizzly bear is hungry, it’s time to feed him lunch. 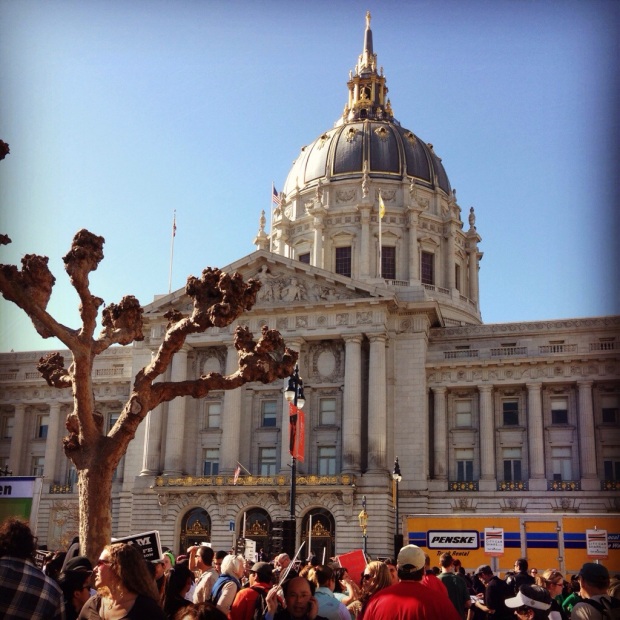 But on the way to lunch, we drove past the Civic Center, which was quite obviously being used for rally purposes. Curious for a new experience, we spontaneously pulled over to listen in on the happenings of a major gathering of people who did not quite share the same opinions or values as I do.  A big city demonstration was new to a small town girl like me, and I was slightly uncomfortable but glad we stopped. I highly recommend being a silent observer in this type of situation, as you get the other perspective sans confrontation.

After subjecting my friend Laura to a gushing rave about my new obsession of cornmeal crust pizza earlier in the week, she recommended we visit Little Star Pizza. We ended up both on Divisadero and in cornmeal-crust heaven, if one should exist.

The vibe inside was conducive to giddy anticipation and happiness, generally.

We ordered the deep dish, half Little Star, half Classic. This masterpiece is what ended up in front of us.

The crust was divine. The composition, intriguing, with toppings first, then cheese, and lastly the sauce on top. This little piece is about to meet its maker. 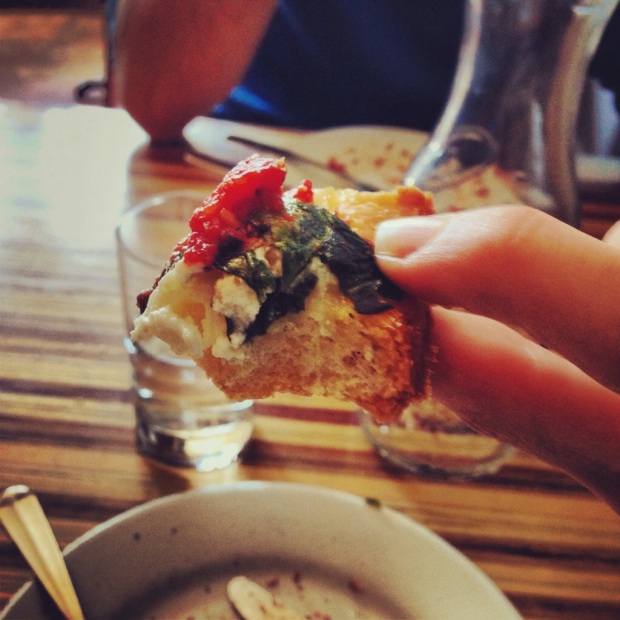 The verdict? Good to the very last bite. Which I ate. Clean plate club. I told Bill that this is becoming one of our “spots”, even though we live four hours away.

Plans to meet one of my bridesmaids, Shelby, and her boyfriend Joe at Crissy Field lead to Bill’s first glimpse of the Golden Gate Bridge. Welcome to the pride and joy of Northern California, Minnesota Boy!

And in the distance. It was so beyond great to catch up with Shelby and Joe, and meet their new bundle of personality Charlie, that we chose to extend our afternoon together as much as we could.

With a pitcher of sangria of course! Hanging with Shelby is always a reminder to love the simple life, with some of my best memories consisting of impromptu afternoon drinks with absolutely no agenda and no worries allowed. Our final date at Hayes & Kebab was no different, and I left content with life as it is… and slightly tipsy.

As we packed ourselves up in the car to leave, this sweet little thing seemed to be bidding us adieu. I couldn’t help but sneak a photo, having been utterly obsessed with The Little Mermaid growing up. Max here just tugged at my heartstrings.

The four-hour dive went quickly. Both of us had to work the next day (Sunday), he with his normal anchoring schedule and myself with a speech at a career symposium. And even though we both wished the weekend wouldn’t end, would last just a little longer… I couldn’t help but feel closer to him than ever before. It’s amazing what spending time focusing on each other can do, and now I’m floating through the week with these new memories on my mind. This trip was no longer bittersweet, as they often have been in the past. It was just sweet.

Billy, what do you say we do this again soon?

The Universe works in mysterious ways... • 6 years ago I had never heard of Fort Myers... • 5 years ago I found myself here thousands of miles from my home, my family, and my friends... • 4 years ago @dramadancer and @jvalero9 made the cross-country leap from California to SWFL... • 2 years ago I met Paul and Darren on a catamaran in the BVI and then THEY moved here... • And the very first weekend of 2020 brought @jaellamacauley and @adrianmacauley and family from CA to right down the road. I don’t know what just happened in my living room this weekend, but I like it. 🥰😂🤯 #friendsfamily #pinchme #hello2020 #crosscountrymoves #dreamsdocometrue #universeworksinmysteriousways
Happy New Year, loves. May 2020 bring you an abundance of love, laughter, and so much more with great friends and wonderful family. ✨ - A Wish From My (New-Decade, Same-Kickass) Self 😜💋 • • • #cheerstothenewyear #goodbye2019 #hello2020
Happy birthday to the OG Christmas Crasher! Keeping the party alive every December 26th since 2015. 🥳